The Gathering of Grandmasters 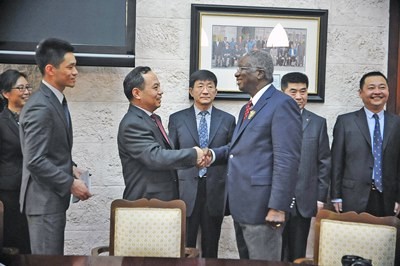 Prime Minister Freundel Stuart greets Major General Chang ming Hu prior to their meeting in Parliament while Ambassador, Wang Ke (far left) and other members of the delegation look on. (A.Miller/BGIS)

Prime Minister Freundel Stuart has described the Barbados and China relationship as “a long and fruitful” one, with boh countries working together at the political, economic, cultural and military levels.

However, Mr. Stuart wants to see more Chinese tourists here, and pointed out that an Air Services Agreement and visa requirements needed to be finalised.

“We are paying special attention to getting those visa requirements worked out because we want to make travel between the two countries as easy as possible,” he stressed.

He made the comments recently at Parliament while meeting with a six-member delegation from the People’s Republic of China.  The group was led by Deputy Chief of the Office of International Military Cooperation of the Ministry of National Defence of China, Major General Changming Hu; Major General Bing Wu of the Central Military Committee of China; Senior Colonel Yajun Sun, Anhui Provincial Military Command; and China’s Ambassador to Barbados, Wang Ke.

The Prime Minister said both countries had worked closely together at the United Nations and other international fora promoting shared values. He added that he was pleased about China’s relationship with the Barbados Defence Force, saying that the training and equipment received had done much to strengthen that organisation.

“We look forward to the deepening of that relationship and expanded training opportunities from China at the military level,” Mr. Stuart stated.

Major General Hu agreed that China and Barbados had enjoyed good bilateral relations over the past 39 years. He said the Chinese President attaches great importance to the relationship between both countries, as well as the friendly relations with the Caribbean region. “We strongly believe that our relationship will become better and go to a new level,” he stated via an interpreter.

Major General Hu indicated that a large number of Chinese travel overseas and he looked forward to some of them visiting Barbados.